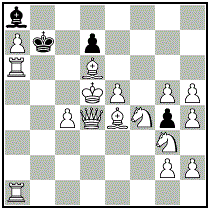 Since neither loop may have occurred, we can ignore them. There are just 4 prior positions which must have recently occurred, including the current position: 0. ... Rc6-a6 -(2n+1). Kc8-b7 Bc7-d6+.

This beautiful problem relies on the interpretation of the interaction of Laws and Codex whereby the DP calculator "knows" that claiming draw by repetition is mandatory, and so a future forced third occurrence of a position implies that the game ends now. At one stage I was against this interpretation but currently I am agnostic. At the very least, it leads to a rich and self-consistent problem here.
An early 'try' for the solution was:
Brett um 180 Grad drehen, dann 1. e1=S axb5 2. Sf3 Txf3= Die Diagrammstellung kann wie folgt aufgelöst werden: R: 1. Tc6-a6 Kc8-b7 2. Lc7-d6+), aber es gibt keine Lösung für das Hilfspatt.
But a much simpler position would result in the same solution, so there is clearly something else going on.
Note:
(1) "fairy" because any help problem except for h# is automatically fairy.
(2) "joke" because of playful interpretation of "h=2" as draw not stalemate as is standard.
Henrik Juel: The = in the stipulation should be interpreted as draw, not stalemate. With retroplay -1.Tc6 Kc8
-2.Ta6-c6 Kb7, the forward play 0... Kc8+ 1.Tc6+ Kb7 2.cTa6 yields draw by triple repetition! (2004-04-26)
Henrik Juel: Here is a better explanation: The joke is not turning the board, but interpreting the stipulation as 'help-draw in 2' rather than the customary 'help-stalemate in 2'. White captured [Pa7] above wPa and the other missing black men with P's, so last move must have been Tc6-a6. After 0... Kc8+ 1.Tc6+ Kb7 2.Tc5+, where Black and White help each other for 2.0 moves, the play must continue 2... Kb6+ 3.Tc6+ Kb7, and the game is drawn by triple repetition. The problem won 3rd Commended. (2004-12-10)
comment