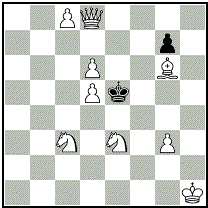 Pawn On 8 In Chess Problems

“ I claim, therefore, P on 8 in Chess strategy, and conclude this paper with a problem commenced in July, 1879, and which I have only succeeded in making sound by the introduction of Dummy. If K on B 8, or no man at all on that square, then 1 Q to K R 4, or 1 Q to B 8, and mate in two more moves. Dropping the men one square down the board also produces a cook, in fact the dead pawn saves the problem from being relegated to the waste basket. I consider this one of the best compositions I have put together during a practice of thirty years, and I fail to see why it should be treated to Lynch-law, when the queen ing-a-pawn rule is to " reward it with the greatest possible advantage." I say it advisedly, that should Blackburne, Steinitz, or Zukertort ever play a match game in which promoting a pawn would lose the game, whilst leaving it dead would draw it, they would unhesitatingly refuse promotion, quoting the B. C. A. laws, by which they are governed in their ordinary play.” - Pages 32 & 33