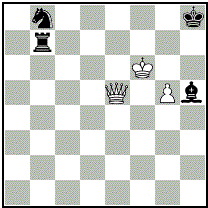 "Dear Sir,
I have composed a miniature which seems to cause some controversy among those I have shown it to: (diagram) White to play and win.

I am convinced that this is legal. Article 9.1 of the Laws of Chess states that "a king is in check when the square if occupies is attacked by one or two pieces." This wording specifically eliminates the possibility of the king being of check when it is attacked by three pieces. Therefore White's third move is in accordance with Article 9.2: "check must be parried by the move immediately following."
The remaining play is trivial: 3... Kh7 4. g8=Q+ Kh6 5. Qg7#
It is not too far-fetched to suppose that such a situation could arise in a game. The FIDE Rules Commission should therefore be invited to change the wording of Article 9.1 at Thessaloniki. If you agree, or think the problem is sufficiently amusing, it would give my great pleasure to see it published in your magazine.