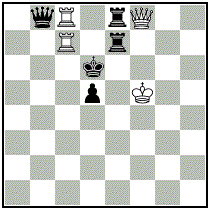 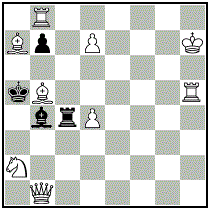 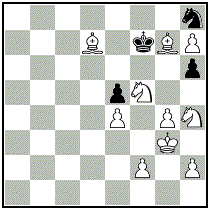 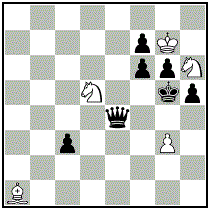 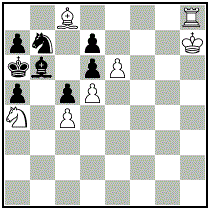 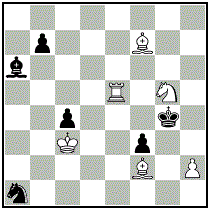 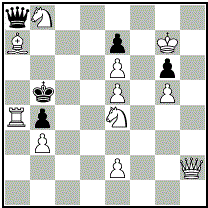 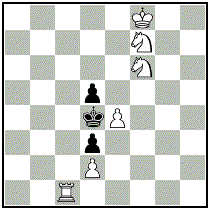 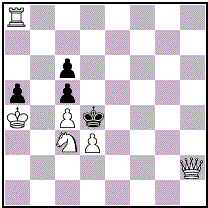 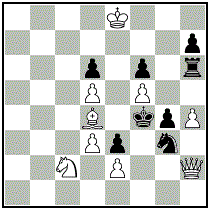 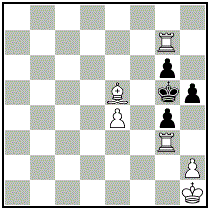 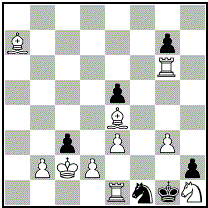 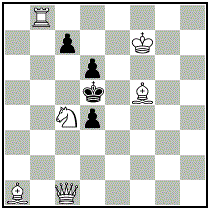 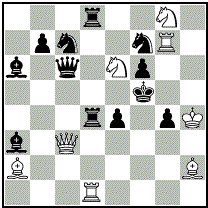 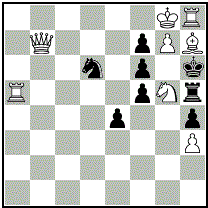 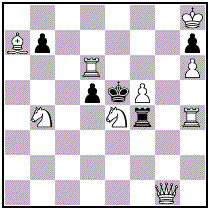 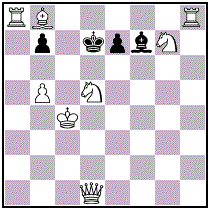 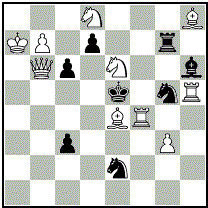 Author's comment: ‘I remember one particular problem I had been trying to compose for months. There came a night when I managed at last to express that particular theme. It was meant for the delectation of the very expert solver. The unsophisticated might miss the point of the problem entirely, and discover its fairly simple, ‘thetic’ solution without having passed through the pleasurable torments prepared for the sophisticated one. The latter would start by falling for an illusory pattern of play based on a fashionable avantgarde theme (exposing White’s King to checks), which the composer had taken the greatest pains to “plant” (with only one obscure little move by an inconspicuous pawn to upset it). Having passed through this “antithetic” inferno the by now ultra-sophisticated solver would reach the simple key move (Bishop to c2) as somebody on a wild goose chase might go from Albany to New York by way of Vancouver, Eurasia and the Azores. The pleasant experience of the roundabout route (strange landscapes, gongs, tigers, exotic customs, the thrice-repeated circuit of a newly married couple around the sacred fire of an earthen brazier) would amply reward him for the misery of the deceit, and after that, his arrival at the simple key move would provide him with a synthesis of poignant artistic delight. I remember how slowly I awoke from an unconscious state of concentrated brooding about chess and in front of me, on the large English chess board of bright yellow and scarlet leather, there was finally the immaculate position, like a constellation just formed. It worked. It was alive.'
Yoav Ben-Zvi: The original source is the Russian Novelist's autobiographical "Speak, Memory" 1947 (section 3 of chapter 14). The problem appears as A315 in Chess Problems: Introduction to an Art" by Lipton, Matthews and Rice, which also quotes part of Nabokov's text in its introduction. Nabokov's words on chess problem composition are profoundly beautiful. (2013-07-02)
comment 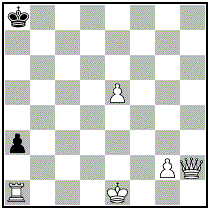 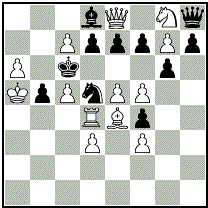 Original veröffentlicht mit der Diagrammstellung 3bQ1Nq/2PpppPp/P1k3pr/KpPnP2P/3R1p2/3PP3/8/7B
und fehlerhafter Kontrollnotation (im Dia wBe3+e5, in der Steinkontrolle e8+c5, was aber leicht als Druckfehler identifizierbar ist).
Korrektur der Stellung am 05.05.1923, aber der ep-Key ist immer noch nicht gerechtfertigt, es sei denn, die nur in Notation erschienene Korrektur enthält immer noch einen Druckfehler (nicht wTd4, sondern wTb4, was möglich scheint, weil das kyrillische "б" dem lateinischen "d" ähnelt und vielleicht der Grund für eine Verwechslung war). Mit wTb4 wäre die Aufgabe korrekt, ebenso mit wTa4 (auch 'a' und 'd' sind leicht verwechselbar).
A.Buchanan: I was happily surprised to see here that apparently Nabokov had dipped his toe into the retro world, but this doesn't seem to be successful or easily repairable. (2018-01-28)
Mario Richter: In his London/Cambridge time (1919-1922), he was said to have been an interested follower of the activites of the "Good Companion Chess Problem Club" and its publication 'Our Folder'. (s. http://nabokov-lit.ru/nabokov/kritika/svyatoslav-nabokov-i-shahmaty.htm) It's also likely that he read the 'Times' were he may have been in spired by e.g. retro problem P1346234.
Furthermore, retrograde analysis plays a role in one of his novels, s. Nabokov's foreword to 'Luzhin's Defense', were he explains "the retrospective theme" of chapters 4-6: " The entire sequence of moves in these three control chapters reminds one — or should remind one — of a certain type of chess problem where the point is not merely the finding of a mate in so many moves, but what is termed 'retrograde analysis,' the solver being required to prove from a back-cast study of the diagram position that Black's last move could not have been castling or must have been the capture of a white Pawn en passant." (2018-01-28)
A.Buchanan: @Mario: thank you so much for your comments, and for the wonderful link to the Nabakov biographical article. I have not yet read the novel, but I enjoyed the movie. One feature of the movie was strange though: the tournament was divided into two flights, and the winners of the two flights met in the final. Was this just a plot device of the movie, or did it happen like this in real life? Or in the novel?
The final game of the movie is terrific see e.g. https://www.youtube.com/watch?v=o6Tyn5YUOnQ where also there is a recommendation to a wonderful short chess comedy film that I had never heard of: "Chess Fever", available with subtitles at https://www.youtube.com/watch?v=TN6m711ddZk (2018-01-28)
Mario Richter: I found the official solution ( unfortunately the quality of the scan isn't good, s. http://elib.shpl.ru/pages/1032018/zooms/8), perhaps someone with better knowledge of the russian language can check, if I interpreted the text correctly (Yoahv Comes to mind ...) (2018-01-29)
Yoav Ben-Zvi: Nabokov's memoir "Speak Memory", in a describtion of the process of composing P1035267, expresses a wish to trap the experienced solver with Tries that are "red herrings". My speculation is that, in the current problem, Nabokov intended the e.p. capture to be a trap of this sort. Unfortunately there is no #2. Apparently Nabokov became aware of the flaw and could not correct it (placing WRd4 on b4 loses the point) as he did not include the problem in his collection "Poems and Problems".
The references to "Retrograde Analysis" in the forward to the English edition of "The Luzhin Defense" are poetic. I do not know of a sound published problem. He did publish a retractor: P0004698. (2018-01-30)
VL: Sorry, I see only 3 obligatory captures of w pawns: bxc, g4xf5 and h6xg7... With wRb4 the problem does look to be sound (!?). I looked at the original publication of 5.5.1923 (in old Russian) kindly delivered by Mario and found nothing additional. Definitely, still "Rd4". (2018-02-01)
Mario Richter: Henrik's capture analysis referred to the earlier version of the position.
The problem is indeed sound with wRook moved to b4 or a4 (perhaps the printer mixed up 'a' with 'd' which look nearly identical in the font used in 'Rul'?!)
Btw. the official solution clearly shows that the ep-key was in fact intended. (2018-02-01)
Yoav Ben-Zvi: Moving WRd4 to b4 creates a sound "En passant as key" problem but it shows nothing new. Novelty was a top priority for Nabokov as a composer so (despite the "official" solution) I am not convinced that this is what he intended. I think he may have put the WR on d4 (the "official" solution makes it clear that this is not a diagram error) knowing that placed there it invalidates the e.p. capture. Concentrating on the retroanalytical element he did not realize that no alternative #2 exists (I have experienced a similar embarrassment myself).
I suggest moving WPc7 to d6, BPg6 to h6 and removing BBc8 and WQd8. The e.p. capture is a Try that is refuted because Black's last move could have been -1...BN-d5 preceded by -2.WRd5-d4+. The new solution is 1.WNxd7+! Note that the mate after 1...BKxc5 is changed from 2.WRd4-c4# in the Try to 2.WRd4xd5#. I think this represents accurately the intention of the composer (see the Authors comment in P1035267). (2018-02-02)
Mario Richter: Andrew asked about a "tournament [that] was divided into two flights".
Here's one rather strange example, that happened in Berlin:
http://www.chesshistory.com/winter/winter113.html
see note 8420. (2018-02-06)
A.Buchanan: @Mario: that's very interesting, and probably was not the only occasion that the smoker/non-smoker split concept was used, or it would have been mentioned as a unique idea in the article. (2018-03-24)
Henrik Juel: The position seems to be illegal
All missing men were captured by pawns
White captured bxc, fxe, and e.g. gxfxg7
Black captured c7xd6xe5xf4
What happened to [Pa7]?? (2018-01-27, hidden)
Mario Richter: Even worse, under the assumption that b7-b5 was Black's last move, black Bishop c8 wasn't available as a capture object.
So it would be interesting to know the "official" solution ... (2018-01-27, hidden) more ...
comment 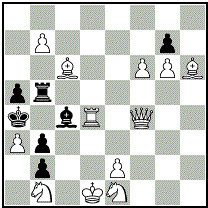 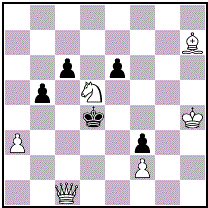 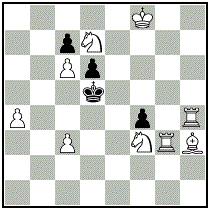