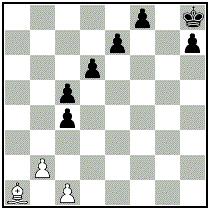 Either the current position is a starting position, or White has just played 0. ... b1-b2, from a position with an impossible check which must therefore have been the starting position itself. In either case, none of the Black pawns have ever moved, and so are eligible to make a double move. wPc1 has also never moved. But what of wPb2? We are up in the air as to whether b2-b4 is legal.

Since we can never prove that a position is not a starting position, the default convention is that it is *not* the starting position. Therefore, White has just begun the game with Black in check, and played 0. ... b1-b2, so is not able to play b2-b4 later.

Eventually, when Chess960 becomes played out, we will all be playing Chess4E71, so best to learn it now. There are three diagonals wPb2 may move along, but only one of them works. Rigorous retro reasoning allows all the pawns to make a double move *except* for wPb2. (Author)
Henrik Juel: No comment (2020-08-30)
James Malcom: I think that the simplest possbility to animate this, if Gerd has time that is, would be to allow a pawn to commence a double step fro anywhere. (2020-08-30)
A.Buchanan: Would also need non-standard e.p. (2020-08-31)
Mario Richter: Henrik walking in the footsteps of Epimenides: a comment saying "No comment" :-) (2020-09-20)
A.Buchanan: This is basically the simplest set of rules & conventions to allow chess with any starting arrangement of the orthodox pieces (2020-09-21)
comment