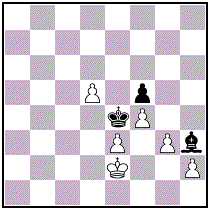 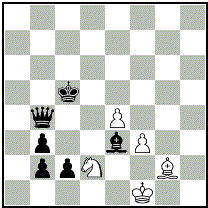 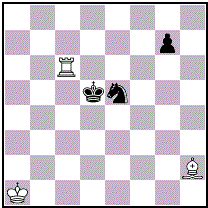 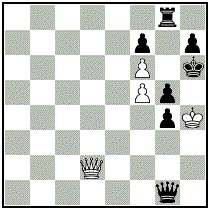 The end position is dead if Black's last move was R: 1. ... g6-g5+ (stalemate is inevitable) but not if it was R: 1. ... g7-g5+ which allows for e.p. Looking at the position prior to the last move:
a) the position with sB on g6 is not dead regardless since the sD can intervene instead of the bP move. This makes the e.p. invalid which would force 1. Dxg5+ Txg5=
b) the position with sB on g6 is already dead so the sB must have come from g7 allowing white to win by 1. fxg6ep#
Yoav's solution is absolutely correct. A further question is: in a) can White actually play 1. Qxg5+? The diagram analysis reports that the position is living/dead depending on ep status, and that we can't tell which. The ep convention says: "An en-passant capture on the first move is permitted only if it can be proved that the last move was the double step of the pawn which is to be captured." But it is silent as to whether other moves whose playability depends upon the playability of the ep move are playable! I term these "contingent moves". This is exactly the situation for Qxg5+. Nor does the ep convention does not rule on the life/death status of a position, but just on whether the ep capture is "permitted".

I think Guus wants the DP rule to have total visibility of the conventions. But I really don't like the idea of just throwing rules and conventions together in a heap. To me it should be like football: the game plays fluidly as much as possible. Occasionally there is no option but the referee must blow his whistle and make a specific, narrow and time-boxed intervention: e.g. he/she orders a throw-in, goal-kick, corner, free kick etc. And then the game returns to normal fluid play. But the referee must never become an active participant in the game. In any case, the conventions today are not robust enough yet to throw into the mix with everything. There's too much scope for confusion and discord.

You may not be aware that almost none of the DP problems which exist today use the conventions at all. In my case, it's a deliberate choice from 20 years ago to mostly avoid this mess. I have various schema problems to explore the ep situation and other paradoxes. But I have no objection to engaging with the conventions (there's clearly lots of new design space there) as long as the conventional retroanalysis comes first, and then we have a focused, bounded consultation of the comprehensive and clearly-written conventions.

I do see a clear conceptual (not verbal) hole in both ep & castling conventions: they do not address the fate of contingent moves such as 1. Qg5+. That's what should be fixed. Although it is giggleworthy to have Qg5+ playable while the ep is not permitted, I don't think it's really the fair answer. Basically, the pessimism inherent in the ep convention should apply at the level of the set of underlying proof games, so it affects all subsequent candidate moves. If no contingent moves are permitted, can we regard the position as dead? That again may be the simplest thing, but again there is a conceptual hole here. So at the moment we are up in the air as to whether the position is living and whether 1. Qg5+ is permitted. If played, the position is then immediately dead anyway, but that's to blur the issue. Comments welcome.
Henrik Juel: 1.Dxg5+ Txg5= seems to secure half a point in both twins
So there is probably some DP trickery, which Andrew will explain soon... (2020-12-03)
Yoav Ben-Zvi: The end position is dead if Black's last move was -1...bPg6-g5 (Stalemate is inevitable) but not if it was -1...bPg7-g5 which allows for e.p. Looking at the position prior to the last move: in a) it is not dead regardless since the bQ can intervene instead of the bP move (this makes the e.p. invalid forcing 1.wQxg5) but in b) the position with bP on g6 is already dead so the bP must have come from g7 allowing white to win by 1.wPf5xg6 e.p. (2020-12-04)
A.Buchanan: Absolutely correct Yoav. So in a), can White actually play 1. Qxg5+? Until the ep convention intervened, White had an alternative living move. So should DP rule have visibility over the ep convention? Please explain your answer :D (2020-12-04, hidden) more ...
comment