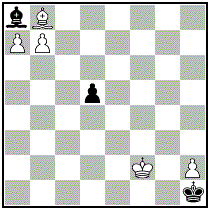 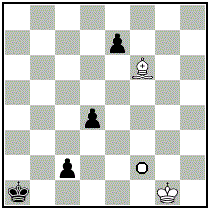 Added 1 Dummy to P1359493, and changed the dedicatee. My luck with this little series continues to hold: the dedicatee's surname begins with a D!
James Malcom: Andrew, I just found this today-I thank you very much, but perhaps it holds no more, for my true name is known now! (2020-10-28)
comment 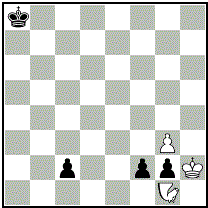 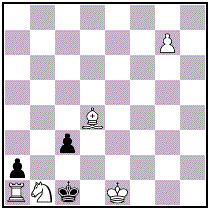 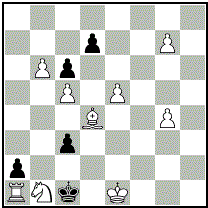 Final development of the earlier P1380121

"For those interested in Chess Problems: In Tim Krabbé's "Open Chess Diary" the investigation on an idea in Composition, the so called "Belén-Theme" goes on with more novelties;
James Malcom: This is the first Valladao-Belen: the Belen theme plus promotion and en passant. (2020-09-21)
Henrik Juel: Only the cases with Black defending by d7-d5 and Kc1-c2 in his first two moves lead to dual-free full-length variations (2020-09-21)
comment 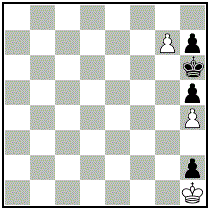 The majority of chess players, familiar as they are with that form of chess joke called "Christmas Problems," may not know until they have read the following beautiful legend just how and when the custom originated nor, for that matter, may they be certain of it then, so cursed is this romantic age with belief.
In the Palace of the World, under the pagan line for December 25, was held the great feast of Brumalia. Upon an occasion of this festival, in the reign of the great King Eshamat, that monarch, his guests and vezers were assembled in the readiness for the festival and whilling away the interval at chess when a regged fakir approached the palace gates and craved admission from Elkanoj Bey, the sentry. That official surveyed him grimly.
"Have you got a card?" he asked with elaborate politness.
"I am a poor man, your excellency," replied the fak. "and the only card I ever had was the two-spot out of my pinochle deck,, but I am fearfully keen for my lunch and no harm, but only good. shall come to you see if you allow me to enter. I swear it as Allah sees it."
"Better beat it while Allah still see you." replied the sentry wearily. "He won't be able to see you if you stick around here long."
"I have traveled far, Effendi," replied the fakir, "and am weary. If the king phrase. I may be able to show him a wonderful play at chess. If he cannot solve it perhaps he may reward his slave with a seat at the banquet."
"In that case." said the sentry,"enter, and be your own usher. If you can get away with it, peace o you: and if noy peace to you."
Now the king fancied himself as a solver. and the fakir was well recieved when he had made known his mission.
"Know. Oh. King," said the fakir. as he set up the pieces, "that this position occured in a game between the great King Mahmud and my friend. Ali Bi, who had the white pieces, and it ran into this puzzling position with white to play, andd though it appears impossbile, netherless my friend Ali Bi did may and win this with one move. Now if his gracious majesty csn tell me how. I forfeit my lucnh: if not, I kick in at the festal board. Is it a bet?"
"You are somewhat shy on collateral,"" replied the kin: "netherless we will at least call it a bargain."

White to play and win

Long time did King Eshamat pore over the position without avail, while his company shifted about uneasily and the head cook cursed softly, but fluently in his mother tongue. Finally the king arose with a grunt of disgust.
"I pass," he said. 'What's the answer?"
'It was not in the bargain, your majesty," replied the fakir, "thay I should tell. only that your majesty should fail to find."
"Netherless?" said the king, "since we cannot solve, the problem it is our privlege to look in the appendix for answer. Selim, bring an ax."
"Pardon your majesty," cried the faki. "I will explain the mystery."
"I should be charmed," said the king drily. "What was the movr?"
"My friend Ali BI," replied the fakir, "pushed the pawm."
"But what did he call for?"
"He called for a drink but it didn't come," said the fakir, with a smile which didn't fit his face. "I hope it doesn't happen again."
"Quick fool." cried the kinh. "What piece did you call fo>"
"A queen, your majesty"
"But that woulld give stalemate."
"Even so, your majesty, "but it is also won. My frien, Ali Bi, is a weaker player and King Mahmad graciously offered odds of a draw."
King Eshamat sank into a chair and gezed at the faker. He shook himself, unable to rouse. He shook himslef again, but failed to fill. The fakir moistened his lips and glanced at the feast.
'You bargain, your majesty," he suggested timidly.
"True." said he king. "Salim, find this fakir a place at the feast."
"Very good, yout majesty," said the servant, "but the places are full. Where would it please your majesty I should put him/"
'Ah," said the king grimly, "just crack his skull and put him with the rest of the nuts."
James Malcom: In my view, since this has a story about a majesty, and give the board state, that 1. g8=K! would be a far better solution as I thought before I stumbled upon the source today. Sygyzy declares this a draw, even if -bPh2. =Q/R is stale, and =B/S+ is too weak and Black can fortress. =P does nothing of course, so king promotion is just right here it was for Goldilocks. (2020-10-17)
A.Buchanan: Thanks for typing this in, James, although I don’t really understand the joke. And if 1. g8=K how does Wh dislodge bK from g6/h6? (2020-10-18)
Henrik Juel: The joke seems to be that Black has agreed to accept stalemate as a win for White
If we disregard this, I agree that White cannot win with an extra king; it is easy to dislodge black king from g6/h6, but later White cannot dislodge him from g8/h8 (2020-10-18)
A.Buchanan: If the convention is dynasty, then promotion to a king turns both wKs into erlkings until one is captured. I think these can mate bK, no? (2020-10-19)
comment 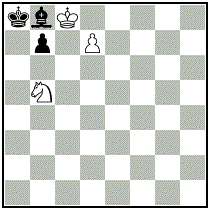 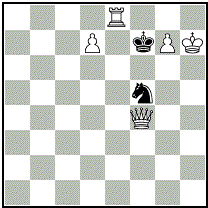 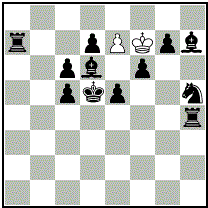 Reprint: http://superproblem.ru/archive/probl/N/Popov-33-2018.gif
James Malcom: This may very well be impossible to C+ with Gustav, but there is an alternative for manual/partial testing by using chess.com's free analysis. When you enter in the position, it completely agrees with the first full 14 moves. It ponders on 15. between which pawn to queen. If you manually enter 15. d8=Q, then the following engine evaluation generally agrees with the solution, and eventually is will find the mate on some point. (2020-11-06)
A.Buchanan: It’s not a matter of style whether you have space after comma in the solution. It’s incorrect syntax for the editor (2020-11-06)
comment 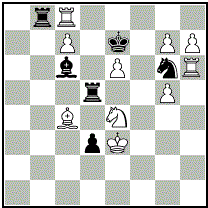