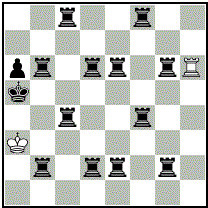 "Retro-volages" assumes every chessman (or a maximal possible set of them) to be volage, i. e. betrayable (capable to become an enemy). This is assumed, unless the opposite have been proven for all proof games. Every volage chessman (except for King) necessarily changes its color when it moves to a square of the opposite color for the first time. After that it remains a normal (unrecolorable) chessman. Here only one dark-squared R and one light-squared R are volage since they stand on even ranks: any promotee had to visit a square of the opposite color at least once in order to arrive from the first rank! Moreover, this is true here even for every proof game: 12 bl Rooks are 2 original ones, 2 recolored w Rooks and 8 recolored and promoted w Pawns. This means that wT is normal: it is a recolored and promoted bl Pawn! Without any bl R, white R would be volage and could not checkmate. a) The PF (subordination) logic assumes the first moving man changing the color of its square to be volage. An autocheck by a recolored man is illegal! 1. Rh5(=wT)#!! (1. ... R-5=wT??) A (multiple) Buridan ass situation: no bl Rook can help since it must be necessarily recolored and give an autocheck! Under pRA, there would be 6x6=36 retrovariants (choices of 2 volage Rooks), and in any of them, Bl would have 10 defences! b) 1. Ra4# 1. Rb3=wT?... 1. R6g3=wT? 10 tries. By the same logic, every try fails since the moving Rook in it passes from a dark-colored square to a light-colored one or vice versa. A grotesque.