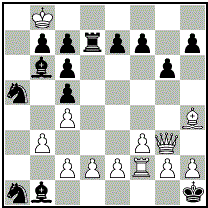 Thomas Volet: The "codex" automatic draw rule results in a situation in which either player on the move can make a move that is simultaneously a draw and a checkmate. Just for fun, as there is no reason I can see to accept such a "codex". (2019-01-02)
A.Buchanan: @Thomas Volet: the Codex is deeply unsatisfactory here, stating merely: "Unless expressly stipulated, the 50 moves-rule does not apply to the solution of chess compositions except for retro-problems." Said rule involves decision-making, and lots of fiddling with clocks, physical pieces and score-pad, and I don't see how to apply to a problem world, where none of these artifacts exist. Moreover Codex Footnote 12, excludes all Laws except 1-5, so the 50-moves rules is excluded. In real life, the game cannot be a draw and a checkmate, because the mater must choose one or the other, and the matee has lost before they could claim the draw. I don't see how a problem could differ from this, even with the current convention.
It is perhaps my curse that I want to find a way to make you happy, Thomas V, as well as someone like Thomas Brand who loves the automatic draw, as long as castling is included as an additional termination characteristic! And I insist on doing this in a precise way so that we don't just lapse into vagueness under which no retro analysis is possible. The way forward I believed is that each problem should in principle have its own convention set defined.
No convention set is better than any other. The author's stipulation and solution are paramount, and cannot be rewritten or rephrased (but may be translated). There may also need to be a quasi-canonical stipulation which specifies the convention set under which the author's intentions can function. Thoughts? (2019-01-03)
Per Olin: Related to chess rules and not so much to Codex, a proverb that I believe myself to have invented, and if so, take full responsibility for: 'When changing chess rules, always ask chess problemists first'. (2019-01-05)
Thomas Volet: Thanks to Andrew for the fine intentions towards all. As to simultaneity of contradictory results, under the rules of forward chess in effect the last time I looked (admittedly a few years ago), if the player on the makes a legal checkmating move and at the very moment of placing the applicable piece on the board to complete that checkmate announces "I resign.", the player has both won and lost. (That makes no sense, of course, but is not very unsettling for anyone who has practiced law for over 40 years. The game is over and we are amused.) (2019-04-17)
comment